I like to cook. And sometimes store my recipes. Over the years I have tried KRecipes, kept my recipes in BasKet notes, in KJots notes, in more or less random word processor documents.

I liked the free form entering recipes in various notes applications and word processor documents, but I lacked some kind of indexing them. What I wanted was free-ish text for writing recipes, and some thing that could help me find them by tags I give them. By Title. By how I organize them. And maybe by Ingredient if I don’t know how to get rid of the soon-to-be-bad

Given I’m a software developer, maybe I should try scratch my own itch. And I did in the last month and a half during some evenings. This is also where my latest Qt and modern C++ blog posts comes from 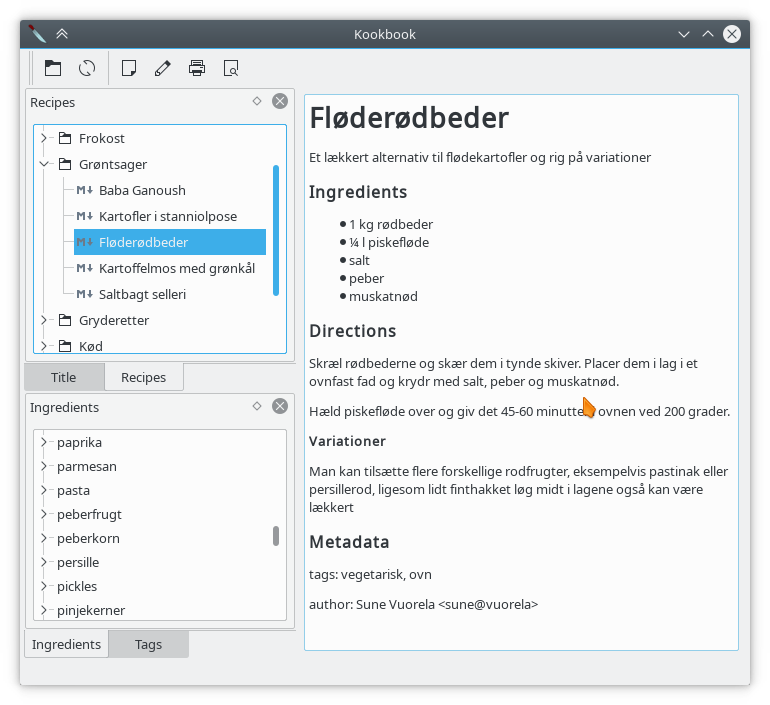 The central bit is basically a markdown viewer, and the file format is some semi structured markdown in one file per recipe. Structured in the file system however you like it.

There is a recipes index which simply is a file system view with pretty titles on top.

There is a way to insert tags into recipes.

I can find them by title.

And I can find recipes by ingredients.

Given it is plain text, it can easily be synced using Git or NextCloud or whatever solution you want for that.

You can give it a spin if you want. It lives here https://cgit.kde.org/scratch/sune/kookbook.git/. There is a blueprint for a windows installer here: https://phabricator.kde.org/D12828

There is a markdown file describing the specifics of the file format. It is not declared 100% stable yet, but I need good reasons to break stuff.

My recipe collection is in my native language Danish, so I’m not sure sharing it for demo purposes makes too much sense.

The other day, some user of Extra CMake Modules (A collection of utilities and find modules created by KDE), asked if there was an easy way to query cmake for wherever the KDEInstallDirs points to (KDEInstallDirs is a set of default paths that mostly is good for your system, iirc based upon GNUInstallDirs but with some extensions for various Qt, KDE and XDG common paths, as well as some cross platform additions). I couldn’t find an easy way of doing it without writing a couple of lines of CMake code.

Getting the KDE_INSTALL_(full_)APPDIR with default options is:

and various other options can be set as well.

This is kind of simple, but let’s just share it with the world:

I don’t think it is complex enough to claim any sorts of copyrights, but if you insist, you can use it under one of the following licenses: CC0, Public Domain (if that’s in your juristiction), MIT/X11, WTFPL (any version), 3-clause BSD, GPL (any version), LGPL (any version) and .. erm. whatever.

I was trying to get it to work as a cmake -P script, but some of the find_package calls requires working CMakeCache. Comments welcome.

I recently did a short tongue-in-cheek blog post about Qt and modern C++. In the comments, people discovered that several compilers effectively can optimize std::make_unique<>().release() to a simple new statement, which was kind of a surprise to me.

I have recently written a new program from scratch (more about that later), and I tried to force myself to use standard library smartpointers much more than what I normally have been doing.

I ended up trying to apply a set of rules for memory handling to my code base to try to see where it could end.

By it self, it is quite ok to work with, and we get all ownership transfers documented. So maybe we should start code this way.

But there is also a hole in the ownership pass around, but given Qt methods doesn’t throw, it shouldn’t be much of a problem.

More about my new fancy / boring application at a later point.

I still haven’t fully embraced the c++17 thingies. My mental baseline is kind of the compiler in Debian Stable.

At some point, I needed to copy paste emojis, but couldn’t find a good way to do it. So what does a good hacker do?
Scratch an own itch. As I wrote about in the past, all these projects should be shared with the rest of the world.
So here it is: https://cgit.kde.org/scratch/sune/aubergine.git/

It looks like this with the symbola font for emojis: 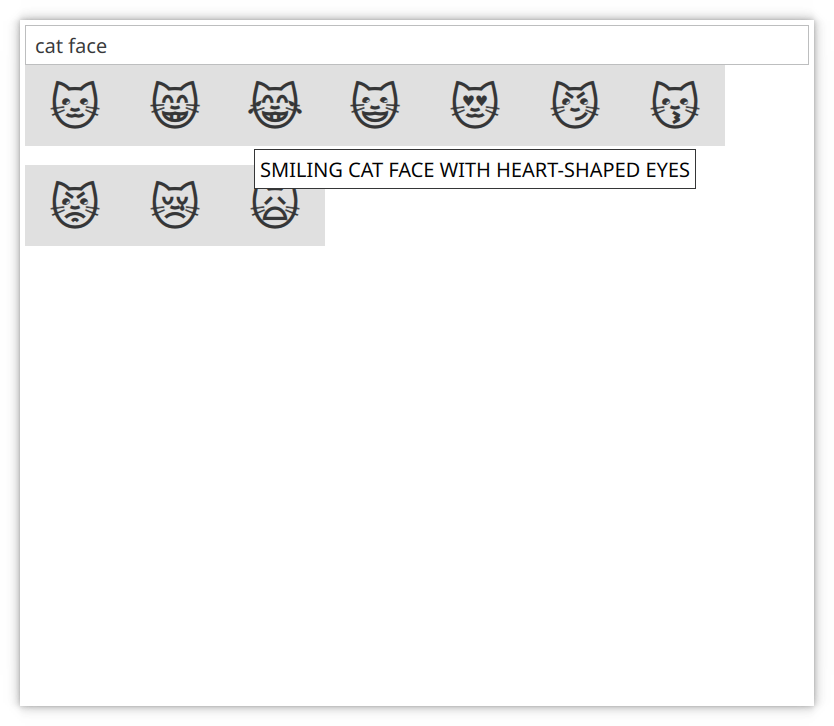 It basically lets you search for emojis by their description, and by clicking on a emoji, it gets inserted into the clipboard.

As such, I’m not sure the application is really interesting, but there might be two interesting bits in the source code:

And of course, now it is simple to describe fancy cooking:

A couple of years ago, I made a blog post, KDE makes Qt, with data about which percentage of Qt contributions came from people starting in KDE. Basically, how many Qt contributions are made by people who used KDE as a “gateway” drug into it.

I have now updated the graphs with data until the end of September 2017:

Many of these changes are made by people not directly as a result of their KDE work, but as a result of their paid work. But this doesn’t change the fact that KDE is an important project for attracting contributors to Qt, and a very good place to find experienced Qt developers.

After a bit of a debugging session, I ended up looking at some code in a large project

There is at least a couple of solutions.

I guess the lesson learnt is be careful when capturing shared pointers.

So. I was stuck with a container of tuples that I wanted to see in a Qt view (QTableView, QtQuick ListView or similar). So how to do that?

Another problem: I haven’t been doing fun things with templates recently.

Of course, we are also QtQuick friendly

and a delegate containing the following

But enough about creation.

Luckily we got you covered. Insert two extra rows at position 1?

Read-only looping over the elements?

If anyone is interested I will polish the code a bit and publish it. If that’s the case, how should I name this thing?

And I did get around doing fun things with templates again.

R is for Randa

This week I have been gathered with 38 KDE people in Randa, Switzerland. Randa is a place in a valley in the middle of the Alps close to various peaks like Matterhorn. It has been a week of intense hacking, bugfixing, brainstorming and a bit of enjoying the nature.

R is for Reproducible builds

I spent the first couple of days trying to get the Qt Documentation generation tool to reproducible generate documentation. Some of the fixes were of the usual ‘put data in an randomized datastructure, then iterate over it and create output’, where the fix is similar well known: Sort the datastructure first. Others were a bit more severe bugs that lead to the documentation to shuffle around the ‘obsolete’ bit, and the inheritance chains. Most of these fixes have been reviewed and submitted to the Qt 5.6 branch, one is still pending review, but that hopefully gets fixed soon. Then most of Qt (except things containing copies of (parts) of webkit and derivatives) should be reproducible.

R is for Roaming around in the mountains

Sleeping, hacking and dining in the same building sometimes leads to a enormous desire for fresh air. Luckily in the middle of the alps, it is readily available, and at least once a day many people went for a walk. To say hi to a sheep. Or to just go uphill until tired and then going back down. Or just finding a circle around. For this area, OpenStreetMap seems to have better maps than Google. We also went on a nice group trip to Zermatt and surroundings, sponsored by our friends in Edeltech.

R is for Releasing

One of the tasks I set myself for was to get my barcode generation library (prison. you know. being behind bars.) ready for release. A bit of api cleanup, including some future proofing, was done, and all users adapted. Hopefully it will be released as part of the next KDE Frameworks release.

R is for Reviewing code

When signing up for the sprint, one has to declare a couple of tasks to work on. One of the things I put myself up to was reviewing David Faure’s code changes. First, he is very productive, and second, he often gets into creating patches in code areas where many other contributors are scared to look. So someone has to do it, and code never scared me.

R is for Running

I planned on going running along the river monday, wednesday and friday. Fortunately that happened, but due to Switzerland having a bit more ups and downs than flat Denmark, it didn’t go that fast.

R is for Random bugfixing

When in the hacking mood surrounded by great developers, it is very easy to just fix minor bugs when you encounter them. There is likely someone around who knows the code in question. Or you are just in the mood to actually fix it, rather than living with a missing clock applet or a corner case crash.

R is for Rubber ducking

I am a brilliant person sized rubber duck. And I did get the opportunity to show off my skills a couple of times, as well as using some of the other people for that.

R is for Raising money

These sprints in Randa is only possible because of all the nice donations from people and companies around the world. The fundraiser is still running, and can be found at

Help us keep going, at this and many other sprints, clickety-click! :D

Sitting on Lake Zurich and reflecting over things was a great way to get started. http://manifesta.org/2015/11/pavillon-of-reflections-for-zurich-in-2016/

After spending a bit of time in a train, I climbed part of a mountain together with Adriaan – up to the snow where I could throw a snowball at him. We also designed a couple of new frameworks on our climbing trip. Maybe they will be presented later.